Ghost Invaders also called “Les mystères de la Basilique” (Mysteries of the basilica) is an alternate reality game based in Saint-Denis city in France. This fiction is a searching game: players have to find why there is ghosts in the city. Indeed since few days we can see ghosts in Saint-Denis: the king Dagobert I, a fishwife from the XIV century, the king Louis XVII…

Ghosts in the crypt of the basilica.

Ghosts in the Art and History Museum of Saint-Denis : in the garden, behind a window display, during the documentary film of the museum.

I’ve realized this project with my friend and colleague Edwige Lelièvre. We’ve done this project during our PhD, I was working on fiction transmedia and Edwige on multi-players games online. We’ve found many partners to support our project :

The game take place in the centre of Saint-Denis, in streets, at the Art and History Museum, at the excavation site called “L’îlot du cygne”, and obviously at the famous cathedral – basilica of Saint-Denis in which are the graves of french kings since Dagobert I.

This game is a transmedia because to solve the intrigue, players have to use many supports: internet, social networks, mobile app, meet up real people, local newspaper, phone calls and texts messages… To support the fiction we have created a lot of events: concerts, projections, street theatre, art installations, illusions…

The website www.ghostinvaders.fr is a platforme for the game, but to understand the story, players have to discovered all the other pieces of the transfiction.

Concert of the french rapper Canardo interrupted by ghosts.

Lights moving in stained glass during the nocturnal concert of orgue and lyric singers, basilica of Saint-Denis.

In this fiction every piece is essential for follow and understand the story, and every events we’ve organized leads players to the next step of the fiction. All media are connected by the same fiction. So, the structur of this transfiction (and the player’s navigation) could be represent with this diagram : 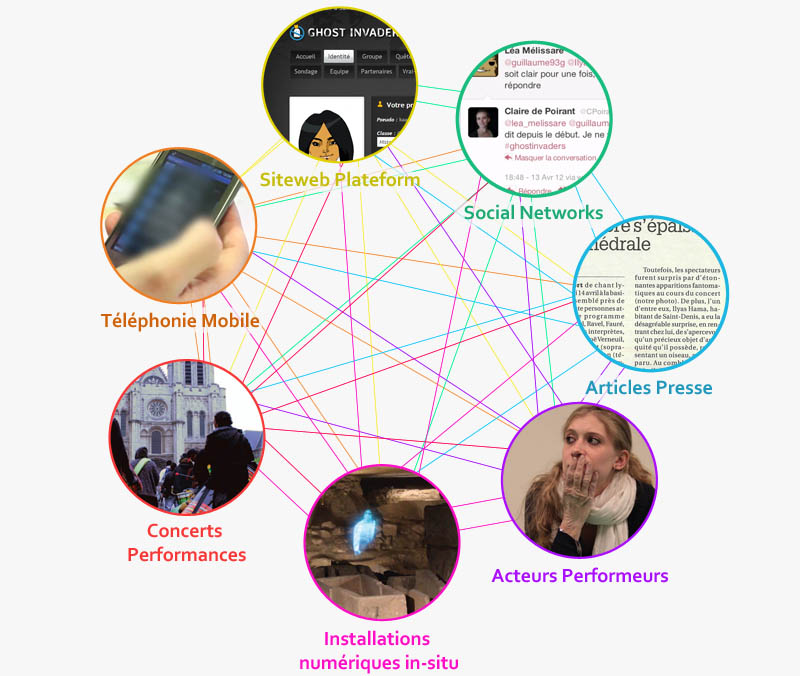 You can also discover the making process of this project watching our “making of”: